These qualities of sense of duty and caring for others were a solid part of Welles’ character all throughout his life. His Nyack and college friends, as well as his family, knew this about Welles. He was especially devoted to his family: his parents, two sisters, Honor and Paige, and his grandparents. He was deeply fond of his uncles, aunts, and cousins, as well, and had a strong and enduring sense of family, always. Welles began his life in Pomona, NY, but his family moved to Upper Nyack, NY when Welles was 7 years old. Thus most of his school experiences and early friendships, from 2nd grade onward, were based in Nyack.

Welles attended Upper Nyack Elementary School, joined the Cub Scouts, then Boy Scouts, played Little League baseball and Pop Warner football. For three summers he was the Rockland County Diving Champion for his age group, and participated in sailing and tennis camps in Nyack. Welles then attended Nyack Middle School where he began to play lacrosse and ice hockey in addition to the other sports. He attended Camp Becket, Becket, MA, then he began to attend specialized summer programs for ice hockey and lacrosse. Welles also enjoyed and excelled at skiing, tennis, sailing and, later, golf.

At Nyack High School, Welles was a high honor roll student and was inducted into the National Honor Society and the French Honor Society. He was a top varsity ice hockey and lacrosse player for 4 years. He joined a travelling ice hockey team, the Bear Mountain Bears, his junior and senior years. Welles continued to participate in scouts into high school. He was also a member of Varsity Athletes Against Substance Abuse (VAASA) and, by invitation, participated in RYLA, a Rotary Club youth leadership conference. He was also invited to attend Camp Sunrise, a unique and specialized leadership camp. Welles graduated with high honors in 1995.

While he was in high school, at the age of 16, Welles joined Empire Hook & Ladder Co., No. 1, Upper Nyack, NY as a junior member. When he turned 18, Welles completed the New York State training program in firematics and became a full member of the company, fighting fires and dealing with emergency situations.

Welles attended Boston College, where he played varsity men’s lacrosse for four years. He graduated in 1999 with a degree in Economics. He was active with the Fellowship of Christian Athletes, a Boston College program that worked with underprivileged youngsters in the Boston area.

After graduation, Welles lived in Hoboken, NJ with Boston College friends for the first year and then in Greenwich Village, NYC with a friend he had met while in Spain.

Welles worked as an intern with the investment banking firm of Sandler O’Neill & Partners during the summer of 1997. During the summer of 1998, he traveled to Spain to participate in a summer program organized by Syracuse University, studying foreign markets. After graduation, Welles joined Sandler O’Neill & Partners, 2 World Trade Center, 104th floor, NYC, working first in research and then as an equities trader after earning his Series 7 license.

On September 11, 2001 when the attacks on the World Trade Center began, Welles was no longer an equities trader. He became a firefighter.

Through telephone calls, Welles was known to have been in his office at approximately 9:00 AM.

However, he was recovered on March 19, 2002 along with FDNY firefighters and emergency services personnel who had been operating a FDNY Command Center in the lobby of the South Tower.

Welles’ final hour remained a mystery until an article about September 11th printed in The New York Times (5/26/02) mentioned eyewitness reports of a mysterious man in a red bandanna on the 78th floor Sky Lobby of 2 World Trade Center when the second plane crashed into the south tower.

This is where Welles was likely to have been at that time, since he was ultimately able to get down to the main lobby before the tower collapsed.

Eyewitnesses reported that, after the plane had hit into the Sky Lobby, a man suddenly appeared “out of nowhere”. He was stripped to his T-shirt and wearing a red bandanna to cover his nose and mouth, protection against the smoke and debris.

This man organized a rescue effort on the floors high above where the official rescue workers were able to reach. He called for fire extinguishers, he found and directed dazed and confused victims to the only stairwell that was open for escape, and he carried a woman down to the 61st floor, then returned to the 78th floor to rescue more people. He turned back up once again after bringing the second group of survivors down.

Eyewitnesses report that the man spoke calmly, with authority, and was obviously well trained. He is reported to have saved many lives that day.

Knowing that her son always carried a red bandanna in his back right pocket, Welles’ mother believed that the description of the mysterious man fit her son: his character, his training and his likely location at the time. She sent recent photographs of her son to the eyewitnesses.

The witnesses confirmed that Welles Crowther was the “Man in the Red Bandanna” who helped to save their lives and others on September 11th.

The Crowther Family ultimately learned, almost 3 years later, that Welles and the members of FDNY with whom he was recovered, had been on their way back up the South Tower with a Hurst “jaws of life” tool to free victims who were trapped under debris, presumably in the Sky Lobby. 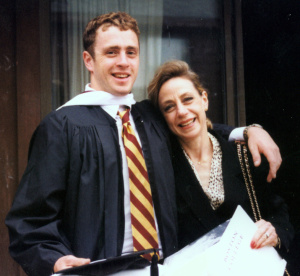